What has happened in the financial world? Despite the September is widely regarded as a difficult month in the financial calendar, mathematicians doubts in general that such seasonal observations provide statistical evidence. And when evaluating the results of September 2017 – or let’s consider the last 6 weeks since early September – they should feel confirmed by a broad range of financial positive markets. In fact many leading markets such as US stocks have marked new historic highs.

In particular European stocks have gained, not least because of good growth figures. The EU reported their last GDP growth at 2.3% p.a. which is not extraordinary much. See also our chart of the day! However considering its structural challenges both on top EU level and inside big core countries such as Spain, France and Italy this is considerable. Finally those countries have been struggling to get their unemployment rates below 10% since the financial crisis starting 10 years ago. And the EU growth rate is remarkable because it is nearly at the level of US growth which has not happened very often in recent years. Despite good economic EU growth rates the euro has slightly lost versus US dollar – for the first time since March of this year.

Some political events provided stability and others added uncertainty. While parliamentary elections in Germany lead to a loss for the established big parties there is still a good opportunity for building a democratic coalition under ruling chancellor Merkel. So are no economic disruptions to be expected from here anymore. On the other hand the British government is heading straight to an even bigger Brexit chaos or at least following quite a risky bargaining strategy. And it seems the Catalans (still Spanish) are trying hard to learn from British Brexit experts. Donald Trump has announced a big tax reform again. In most cases his announcements do not become true and most people are happy about it.

Overall Erwin Lasshofer and his INNOVATIS team expect financial markets to stay friendly. Inflation is low which will keep rates low for the near future both in the US and Europe. Average P/E ratios of about 20 equal an earnings yield of 5% which is still considerably higher than interest rates between 0 and 2%. We still find attractive opportunities that we utilize by tailoring structured products. The easiest access for our clients to benefit is our managed account. 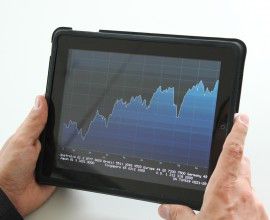 During the last 4 week markets have not been as quiet as many investors expected them to be in a typical summer. In fact we have seen some more political turbulences and an overall excellent earnings season. Versus our last report in early August US and European stocks are higher while crude oil is slightly […]