During recent weeks China has replaced Greece in the headlines. The world’s largest population and second-largest economy has lead Emerging Markets equities, currencies and bonds down.

Chinese mainland stocks have been on a roller coaster ride this year. After almost doubling they crashed by the same magnitude again. See 5-year chart of Shanghai Stock Exchange Composite Index below. The crash wiped out almost USD 4 trillion of market value and prompted the government to take supportive measures such as suspending IPOs and allowing more than 1400 companies to halt trading. 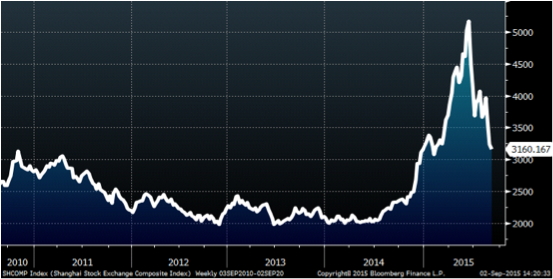 What has happened? Gambling is said to be very popular in China. Instead of long term investors the market has attracted a lot of local margin traders who invest money they borrowed. See chart below for official numbers of Outstanding Balance of Margin Trading. You see a recent level of one trillion Yuan which equals about 150 billion US dollars. This is about one-third of Chinese market capitalization! 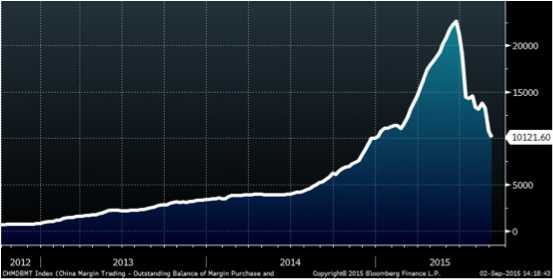 So can we blame the gambling mainland Chinese investor to drive markets down? Not really!

Excursus: Chinese financial markets are still regulated. The banking system is not very competitive. Few banks with dominant market position take huge margins from their clients. Thus there is a large shadow banking system. There are also many restrictions for financial markets such as separate equity markets for local and foreign investors as well as for currency transactions.

If we compare prices of the same mainland stocks paid by locals (A-shares) versus prices paid by foreigners (H-shares) we do see a premium paid by local investors recently most of the time in recent 5 years. And we do see in increased premium since about 1 year. See Hang Seng China AH Premium Index below. Values >100 indicate a premium of A-share versus H-shares of one and the same company. This price difference is possible due to a lack of arbitrage because regulation strictly separates both groups of investors. 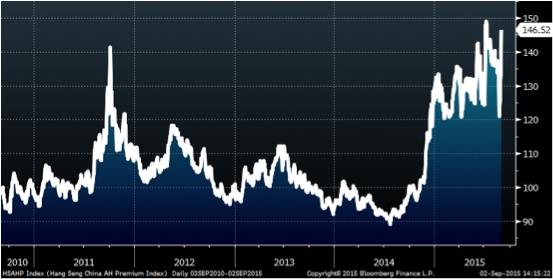 However, during recent weeks this level has remained high. Thus the price drop was about the same for both locals and foreigners. So if Chinese locals investors had been short-squeezed during recents weeks then foreigner would have been hit by about the same magnitude.

So yes, there has been a short squeeze of local mainland investors. And no, this is not the main driver of market plunge.

Is Chinese economy heading for recession?

Annual growth rates has been decreasing over recent years. This year’s target of 7% may be missed. However there is no big news in these (slow) numbers.

Let’s check some early indicators. Export growth has been trending downwards according to slowing global demand. At the beginning of this year exports even dived to -15% versus last year. So foreign demand is rather shrinking. However there is no big or sudden surprise to be found here. 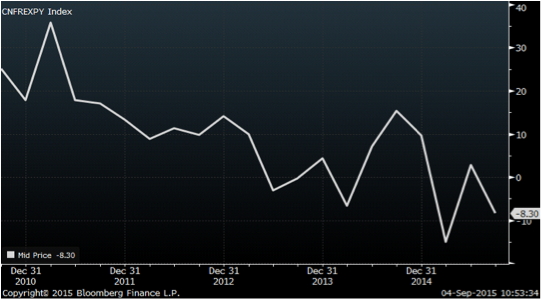 Passenger car sales have dropped to 1.3 million per month which is about one-third less versus the peak at the beginning of the year. Although these numbers are very volatile we see a drop in domestic demand. See chart for monthly number of sold cars below. We also found lower inventory numbers at car dealers which shows their pessimism. 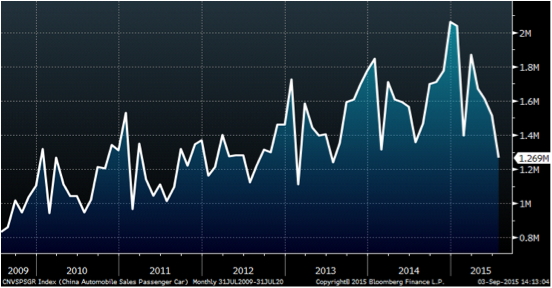 Last but not least let’s take a look at Chinese gamblers again. The statistics of Chinese visitors to the gambling paradise Macau has turned negative too. See recent decrease of -6.1% versus last year in chart below! 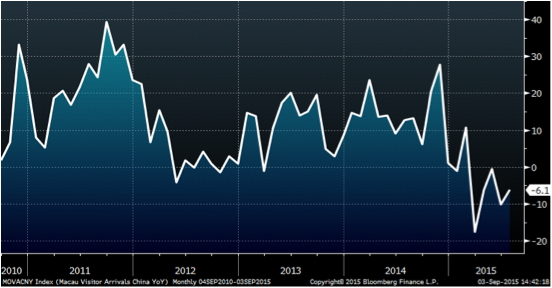 You have to keep in mind that these numbers are very volatile and could turn up again next month. Such cyclical indicator can provide an early indication for future trends. However it is also worth noting that efforts by Chinese government to fight corruption has already prevented some Chinese costumers from excessive shopping for expensive consumer goods and gifts!

Overall we see indicators pointing to both lower domestic and lower foreign demand. Annual GDP growth has been falling. While most developed countries wish they had a real GDP growth falling to 6% or even 5% p.a. this might make a difference for China that still plans 7% for this year.

Or can China end up in a vicious cycle like Greece? Let me anticipate the answer: No they cannot and will not!

They can and they just have devalued their currency to stimulate demand for exports. The Chinese yuan is still pegged versus US dollar fluctuating within a trading band – see 5-year chart of Yuan versus US dollar spot rates below. In early of August China broadened trading bands. The IMF has welcomed this step to more market liberalization. Investors around the world worried about the real status of Chinese economy and about an increasing competition for global currency devaluation that might start from here. 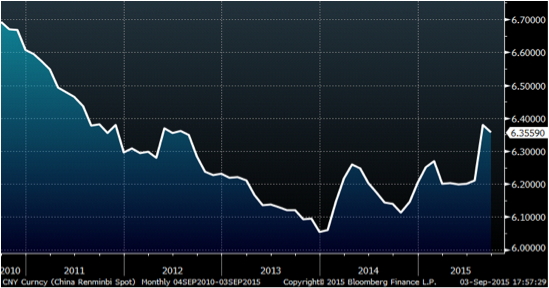 Devaluing the domestic currency may cause inflation by increasing import prices. However China has got fairly low inflation of about 2% for last year and a projection of 1.5% for this year. See of annual change in consumer price index below.

Accordingly China can further decrease interest rates or take similar monetary measures. The current level of the 1-year lending rate is 4.85% which is still a very high level compared to developed countries and gives plenty of room on the downside. 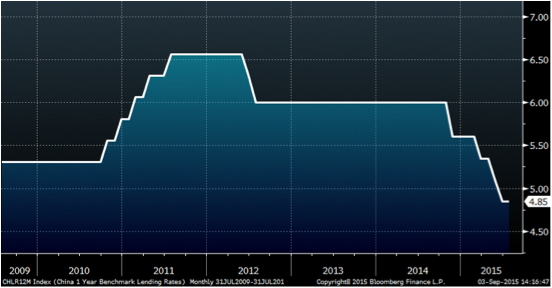 Beside options for monetary easing there are also fiscal measures available and will be implemented as forecast numbers increasing to nearly 2.5% for 2015 and 2016 show below.

Given the low government debt level almost 42% at the end of 2014 the deficit spending could be increased of necessary. 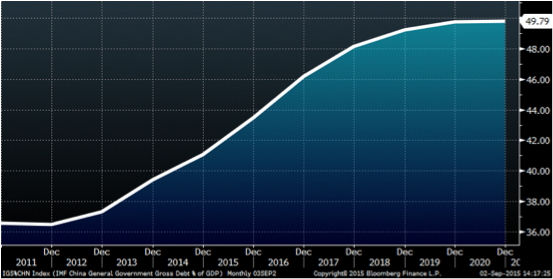 Financial stability is backed by USD 3.65 trillion of foreign currency reserves – see chart below. In combination with a low share of external debt this gives a lot more flexibility than available for other countries. 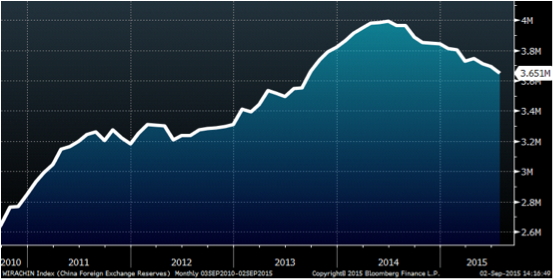 Currently the Shanghai Composite Index (see very first chart above for prices) trades at 15.7 x reported earnings, 13.4 x estimated earnings of current year 11.9 x of next year. This implies an earnings growth of 17.1% and 13.6% respectively. This is the picture for domestic investors in mainland shares. It incorporates some growth expectations at reasonably valuation – similar to European stocks for example. Without growth there is some downside risk for prices as in the rest of the world.

If you compare current price multiples of the Shanghai Composite with its own history you still see an elevated level. The current level is about 25% above its 3-year moving average, see char below. This can at least partly be justified by the reduced interest rate level shown above. 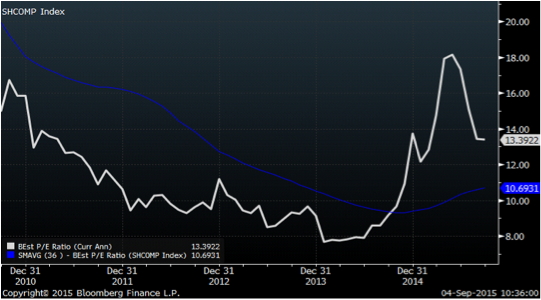 Chinese equity markets have become very volatile. After almost doubling earlier this year they lost as much as half again. Chinese equity markets are still highly regulated separating foreign from domestic capital. Although there has been heavy margin trading by domestic buyers the market crash has affected foreign investors by about the same magnitude. So Erwin Lasshofer and his INNOVATIS team think the down-pressure has not been a local market phenomenon.

The fundamental economic and valuation figures are mixed. GDP growth is continuing to decrease from a high level and might fall short of this year’s target of 7%. Cyclical indicators such as exports, car sales and leisure indices show both slower domestic and slower foreign demand. Stock market valuations and expected earnings growth are not much different from other countries in the world.

The government balance sheet looks sound and offers plenty of options to stimulate the economy when necessary. The debt level is moderate, interest rates fairly high, inflation low and plenty of foreign currency reserves. So economic numbers do not reflect a fragile developing country that might break down because scared foreign investors withdraw their money.

We think the fundamental overall picture looks fair. We do not expect a hard landing of Chinese economy. They have got the instruments and they will use them if needed.

So why is the focus on China these days? Probably because it simply matters. It is the world’s largest population and the second-largest economy. It has been in the transition from regulation to more market forces. The economy is in a long-term shift from exports to domestic demand. And there is an increasing demand for individual freedom. So there is a lot of change in this huge country. And change causes uncertainty. Most investors do not like uncertainty. Particularly they don’t like it in the second-largest economy of the world which has never had as much influence on the global economy before! 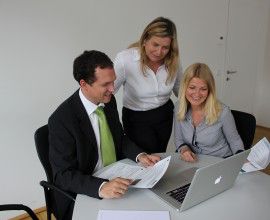 The world of investments is a world of money. Everyday people out there make money with their investments….or they lose it. Money makes the world go round and most people are working really hard for earning their money. That is the reason, why money or investing respectively is an emotional highly charged topic. If you […]

Prices for Crude Oil have dropped dramatically. Just one year ago prices were about twice as high as they are now. For example one barrel of West Texas Intermediate traded in a range between USD 80 and 110 – see chart below. It currently trades below USD 50 per barrel. The picture for North Sea […]